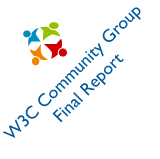 Last week the W3C Music Notation Community Group published MusicXML 4.0 as a W3C Community Group Final Report.  This is the first update to MusicXML since the Version 3.1 release 3½ years ago.

MusicXML 4.0 includes many major new features. It adds or greatly improves support for:

In addition, there are many smaller changes for improving the semantics, appearance, and playback that can be represented directly in  MusicXML files. You can read more about the updates to MusicXML 4.0 in the Community Group Report and the GitHub issue list.

We have updated the MusicXML web site for the MusicXML 4.0 release, including the alphabetical index and musical examples.  We have replaced the MusicXML 3.0 documentation, the MusicXML 3.1 tutorial, and the version history with redirects to the latest information in the W3C Community Group Report.

MusicXML is now supported by more than 250 applications worldwide. With the MusicXML 4.0 release we are making MusicXML easier for developers to use thanks to simplified, expanded, and updated documentation. The new features in Version 4.0 open up new areas for MusicXML application development and will improve accuracy for current applications. We look forward to seeing all the improvements in score exchange as more applications update their MusicXML support to Version 4.0.