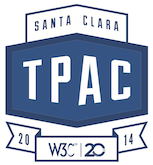 Each year the World Wide Web Consortium (W3C) has a week of combined Technical Plenary and Advisory Committee meetings (TPAC). The plenary day is conducted in “unconference” style with breakout sessions. For this year’s meeting in Silicon Valley, Joe Berkovitz from Hal Leonard / Noteflight proposed a music notation markup session. Joe Berkovitz and Michael Good presented at the start of the session, followed by a discussion with the 25 or so attendees present. The presentations and discussion summary are available online:

It has always been my plan that MusicXML move from company ownership to standards organization ownership once it achieved enough maturity, following the model of the PDF format. The questions have been which organization and at what time. Ten years ago we explored moving MusicXML 1.0 to OASIS, and decided not to proceed, largely because it wasn’t the right time. This was a fortunate decision. Shortly thereafter we embarked on the MusicXML 1.1 project, a large and rapid expansion of the MusicXML format that ensured the commercial success of both MusicXML as a format and Recordare as a company.

MusicXML 3.0 on the other hand is quite mature. We may need one more major update to a MusicXML 4.0 to incorporate changes in the past 3 years, most notably with the SMuFL Standard Music Font Layout project. But at some point in the not-too-distant future, it seems like a good time to once again explore moving MusicXML into a standards organization. Such a move would be contingent on decisions by MakeMusic and Peaksware leadership, as well as decisions by the target standards organization.

Though both organizations are home to related technologies, neither W3C nor MMA has a critical mass of notation company members. Hal Leonard is a W3C member, and MakeMusic is an MMA member. Yamaha is also an MMA member and contributes to AMEI‘s membership in the W3C.

This issue is not unique to music notation. To address it, the W3C has recently added Community and Business Groups to provide lighter weight, lower cost alternatives to full W3C membership. Community and business groups produce Community and Business Group Reports, rather than W3C Recommendations. A W3C community or business group on music notation, with MMA as a member and possible co-publisher, might provide a good choice for a future home within the current standards organization landscape.

Our goal for meeting at the W3C TPAC was to start discussions of this proposal and gauge interest within the W3C community. We had about 25 people at the meeting, which far exceeded both Joe’s and my expectations. It was great to see representatives from the W3C’s digital publishing and open annotations projects attending. These are two areas where there is good potential for future two-way interaction between MusicXML and emerging web standards.

A key element for MakeMusic is that work within the W3C to evolve MusicXML will not stray from the compatibility that has marked MusicXML’s evolution from MusicXML 1.0 to 3.0, where all valid MusicXML 1.0 files remain valid MusicXML 3.0 files. This 100% strict compatibility might need to be adjusted in the future to ensure future progress. If so, it needs to happen in a way that neither breaks MusicXML’s use as an archival format, nor emperils the vast library of MusicXML software that has been developed in more than 180 applications that currently support the format.

Whether at MakeMusic or in a standards organization, MusicXML still needs to be maintained on an ongoing basis as the technologies around it evolve. We don’t want to get into a deferred maintenance situation similar to the HTML4 to HTML5 and MIDI 1.0 to HD Protocol transitions.

Our meeting at TPAC, as well as our previous day’s discussions within the W3C Audio Working Group, were a nice start to the process of considering next steps for MusicXML and possibly other related music notation standards. Joe and I look forward to further discussions within the MusicXML, music notation, and web communities as we figure out the next steps. Thanks to Doug Schepers at the W3C for all his work in facilitating these discussions.