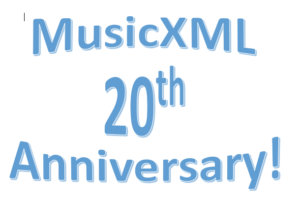 It was 20 years ago today that MusicXML was first publicly presented to the world. On October 23, 2000, I gave a poster presentation on Representing Music Using XML at the First International Conference on Music Information Retrieval in Plymouth, Massachusetts, USA. This talk described MusicXML 0.1 and its early implementations for Finale, Sibelius, MIDI, and MuseData.

Ten years ago I took a look back at the first 10 years of MusicXML with both a blog post and an article on MusicXML: The First Decade. Today I’d like to look at how far we have come in the past 10 years. A lot has happened!

Ten years ago we had over 130 applications supporting the MusicXML format, which was already impressive. In the past 10 years we have nearly doubled that to over 250 applications.

Once of the biggest categories to emerge over the past 10 years as been digital audio workstation (DAW) support. Where Cubase stood nearly alone 10 years ago, it has been joined by Logic, Digital Performer, SONAR, Reaper, and other apps today. DAWs now join notation editors and music scanners as categories where nearly every major app supports MusicXML.

MusicXML’s main success has been as an exchange format between different applications. It has long been the standard when people work together with different apps to prepare written music for print, film, shows, and online services.

However one of the original goals was also to be a consumer format. We wanted musicians to be able to download interactive sheet music and use it in whatever application they like, not just the application where they first accessed the music. Copyright issues make this more complex than I appreciated 20 years ago, but there have still been breakthroughs in the past few years.

The original consumer sites for MusicXML files such as the Choral Public Domain Library focused on public domain sheet music. Today we also have licensed sites for downloading MusicXML files of copyrighted music. MuseScore.com is currently the largest of these sites, having made the transition from unlicensed to licensed since its acquisition by Ultimate Guitar two years ago.

We now know of over 20 sites that offer MusicXML files for sale, subscription access, or free downloads. These range from small sites with tens of files to large ones with either tens of thousands or over a million scores available.

Over the past 10 years we have released MusicXML versions 3.0 and 3.1 with major improvements in functionality. Version 3.0 added many improvements to playback, including a standard set of over 800 instrument sound identifiers. Version 3.1 improved support for the Standard Music Font Layout (SMuFL) standard, including support for many more music notation symbols.

Development has not stopped there. We are currently working on MusicXML version 4.0, planned for release in early 2021. This will provide better support for concert scores, generating parts from scores, and more. Each release also includes many smaller changes to make moving music files between applications ever more comprehensive and seamless.

Ten years ago, MusicXML was owned by Recordare, a small independent company with limited resources. With the development of MusicXML 3.0 in 2011, it became clear that MusicXML needed a larger home to continue to grow.

The first new home was MakeMusic, the company that purchased Recordare’s assets in November 2011. MakeMusic provided the resources for this web site and for the MusicXML 3.0 online documentation. MakeMusic’s support allowed us to start hosting face-to-face meetings at the NAMM and Musikmesse shows. Other companies in the MusicXML community soon joined as sponsors. 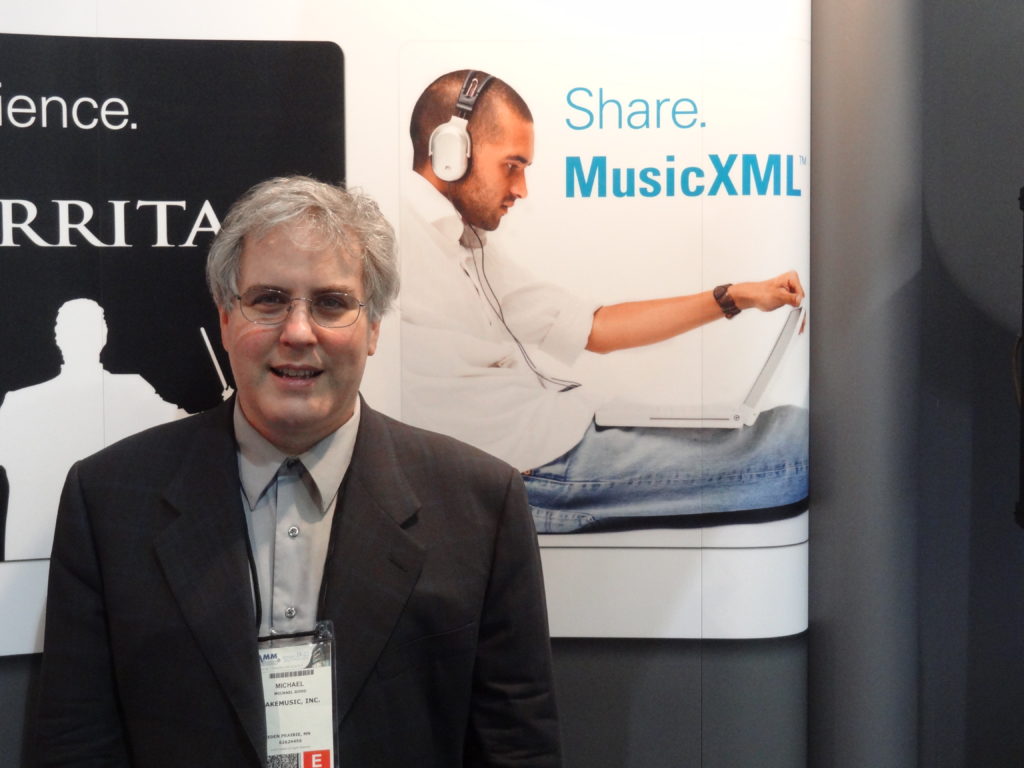 However, development of the format slowed down. People were more willing to collaborate with an independent company like Recordare than with a competitor like MakeMusic. Joe Berkovitz from Noteflight recognized this problem early on. He worked for several years to get MusicXML transferred from oversight by a single company to an independent standards organization.

We found a home in the World Wide Web Consortium (W3C) Community Group structure. MusicXML development was transferred to the W3C Music Notation Community Group five years ago. This group was responsible for delivering Version 3.1 and for the ongoing development of Version 4.0. 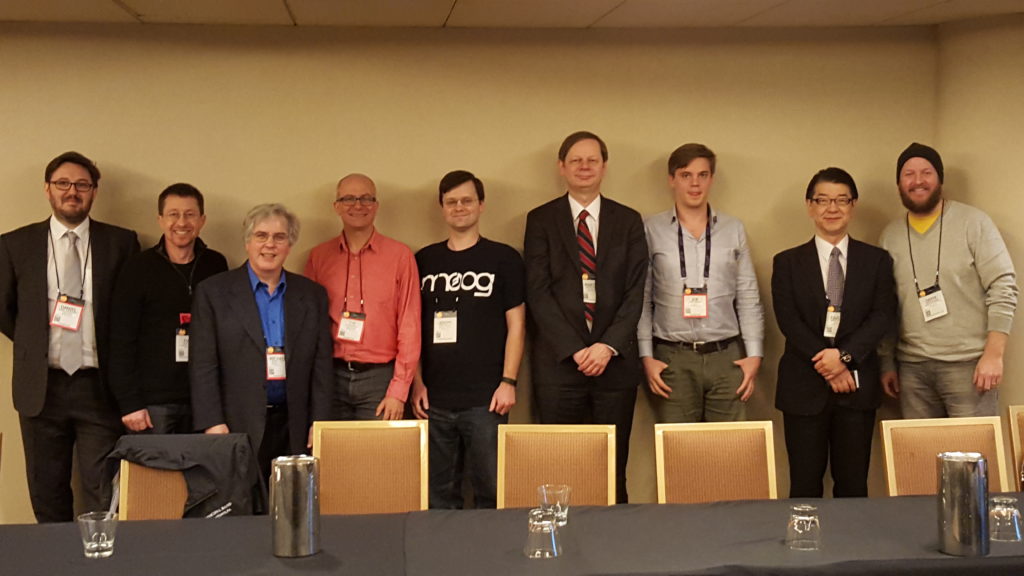 Membership in the W3C Music Notation Community Group is free of charge. You do not need to be a W3C member to join the Community Group. Click on the JOIN OR LEAVE THIS GROUP button on the group homepage to begin the process of joining the group and contributing to the ongoing development of the MusicXML standard.

There are so many people to thank for the success of MusicXML over the past 20 years. When you put together a list like this you are always afraid of leaving someone out, but I will try anyway. 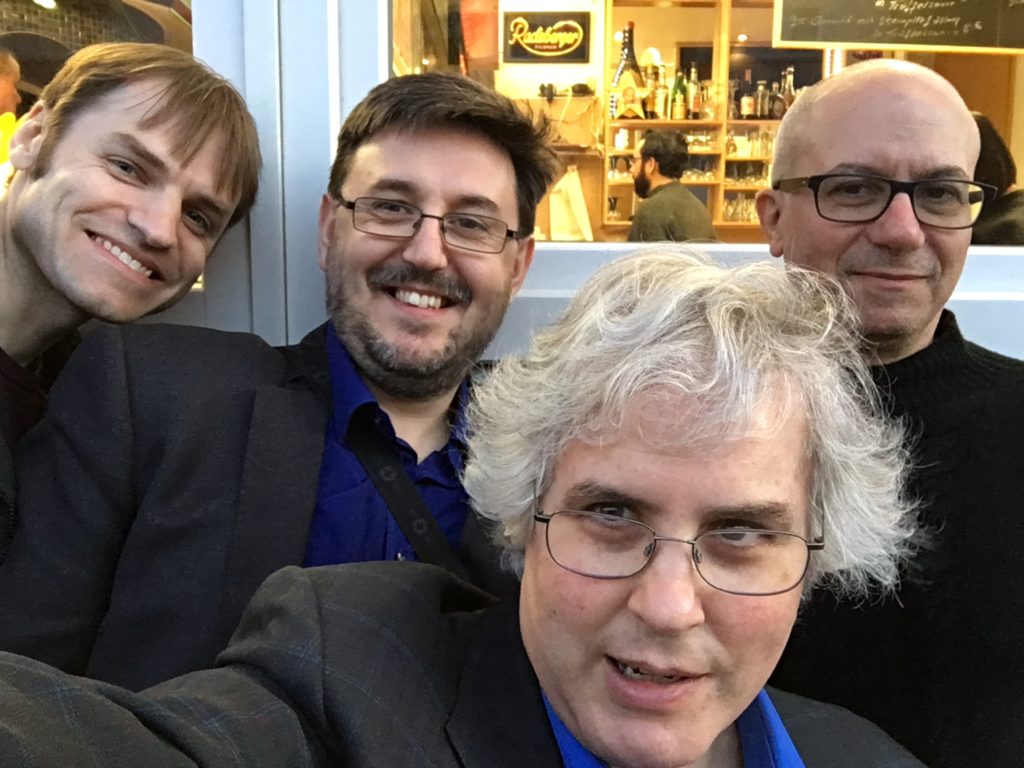